Skip to main content
It looks like you're using Internet Explorer 11 or older. This website works best with modern browsers such as the latest versions of Chrome, Firefox, Safari, and Edge. If you continue with this browser, you may see unexpected results.

In 1951, Flannery O'Connor moved with her mother, Regina, to Andalusia, a farm in Milledgeville, Georgia. O'Connor's lupus hindered her from living on her own. Her writing, Catholicism, and friendships she found through both are some of the things that helped her cope. Many of these friendships are what tie O'Connor so interestingly to Spring Hill College. This page provides insight and never before seen documents and connections between Flannery O'Connor and the five men who tied her to Spring Hill College: Fr. James Hart "Hootie" McCown, SJ; Father Robert McCown, SJ; Father Scott "Youree" Watson, SJ; Father J. Franklin "Frank" Murray, SJ; and Mr. William "Bill" Sessions.

Father James Hart "Hootie" McCown was born in Mobile, Alabama in 1911. In his book With Crooked Lines: Early Years of an Alabama Jesuit, he claims he attended Spring Hill College "for more years than any man alive," as he attended the prep school, college, the school of philsophy as a seminarian. His life is incredibly interesting and multifaceted. He traveled a lot as a priest, teacher, and missionary. Below, I have included some resources that provide insight into his life.

McCown met O'Connor in 1956, while he was the assistant pastor of St. Joseph's Church in Macon, Georgia. After his first visit to Andalusia Farm, he became one of O'Connor's closest friends. He even became known as O'Connor's main spiritual advisor and confessor. Below, there are several articles and essays outlining their unique relationship.

Fr. McCown wrote a lot about his life as a priest and missionary. He has four books that are available at Burke Memorial Library in the Spring Hill College Archives and Special Collections. While none of these books mention his friendship with Flannery O'Connor, they provide great insight into the kind of person O'Connor would trust with rough drafts of her writing and discussion of her personal spiritual experiences.

In 1964, Rev. John J. Quinn of the University of Scranton wrote to Father Frank Murray, SJ, to write a tribute to Flannery O'Connor for the Winter '64 Edition of Esprit Magazine, the university's literary magazine. Father Murray obliged, and his reflection appeared in Esprit's volume 8, number 1. Below, I have collected and digitized the letters between Rev. Quinn and Fr. Murray, as well as a copy of the tribute as it appears in the magazine. This is the first time these letters from the Spring Hill College Archives and Special Collections have been made available to the public.

Father Murray kept a file on Flannery O'Connor during his time working at Spring Hill College. In this file, he collected something he called Some Dicta by Flannery O'Connor. In this document, there kept quotes, conversations, and ideas from O'Connor that he found touching or interesting, probably all compiled by Murray. A scan of this file is available below.

Father Robert McCown, S.J., was born in Mobile, Alabama in 1925. After serving in World War II, he attended Spring Hill College. He became a Jesuit in 1954, returning to Spring Hill College from 1966 to 1974. He died in 2012. He was a writer, priest, filmmaker, world traveler. He was also the older brother to Father James "Hootie" McCown, S.J., one of Flannery O'Connor's closest friends. While he was not as close with O'Connor, he received praise from her in regards to an article he wrote on her novel The Violent Bear it Away. Articles about their relationship and her response to the article are written below. While the article cannot be found online, a print copy can be found in the Spring Hill College Archives and Special Collections.

William Sessions was born in 1928 and is originally from Conway, South Carolina. He was a writer and professor, teaching at many schools, including here at Spring Hill College. Below, you will find some links about William Sessions' life.

William Sessions first met O'Connor in 1956. At the time, he had just began his first job in academics at West Georgia College. After there first meeting at Andalusia Farm, her home, they became consistent and loving friends. Sessions wrote the forward for and published O'Connor's Prayer Journal. Before his death, Sessions was working on the only biography of O'Connor that is officially sanctioned by the O'Connor family. This biography, Stalking Joy, was never finished. Below, there are some articles and essays outlining O'Connor and Sessions' relationship.

Sessions taught at Spring Hill College beginning in the Fall of 1961. He began teaching there about a year after O'Connor's visit in 1960, so he was not around during the lecture. Below, there are articles from the SpringHillian about his involvement at Spring Hill as a professor of English and the  moderator of the Portier Debating Society.

Photo's of the Jesuits 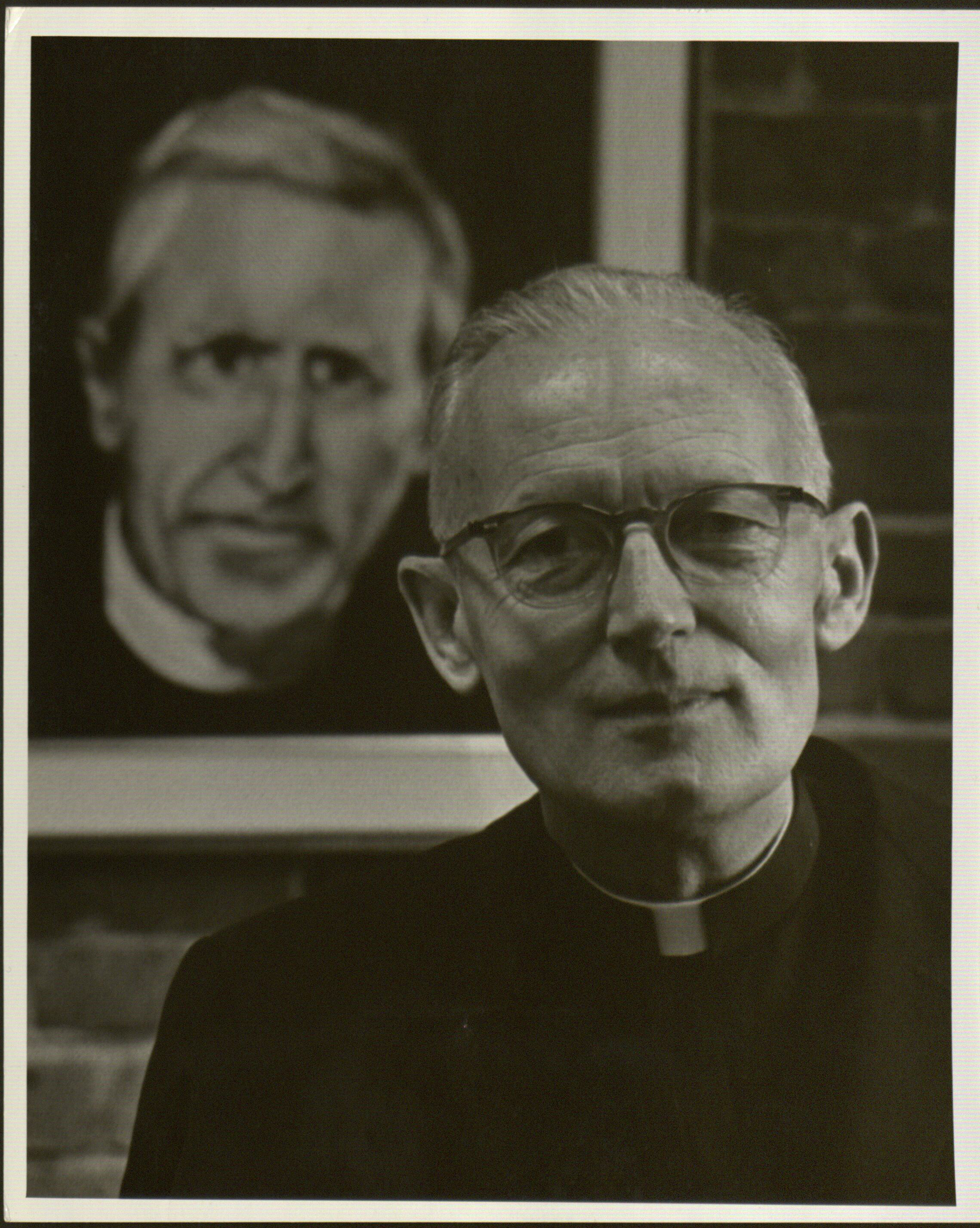 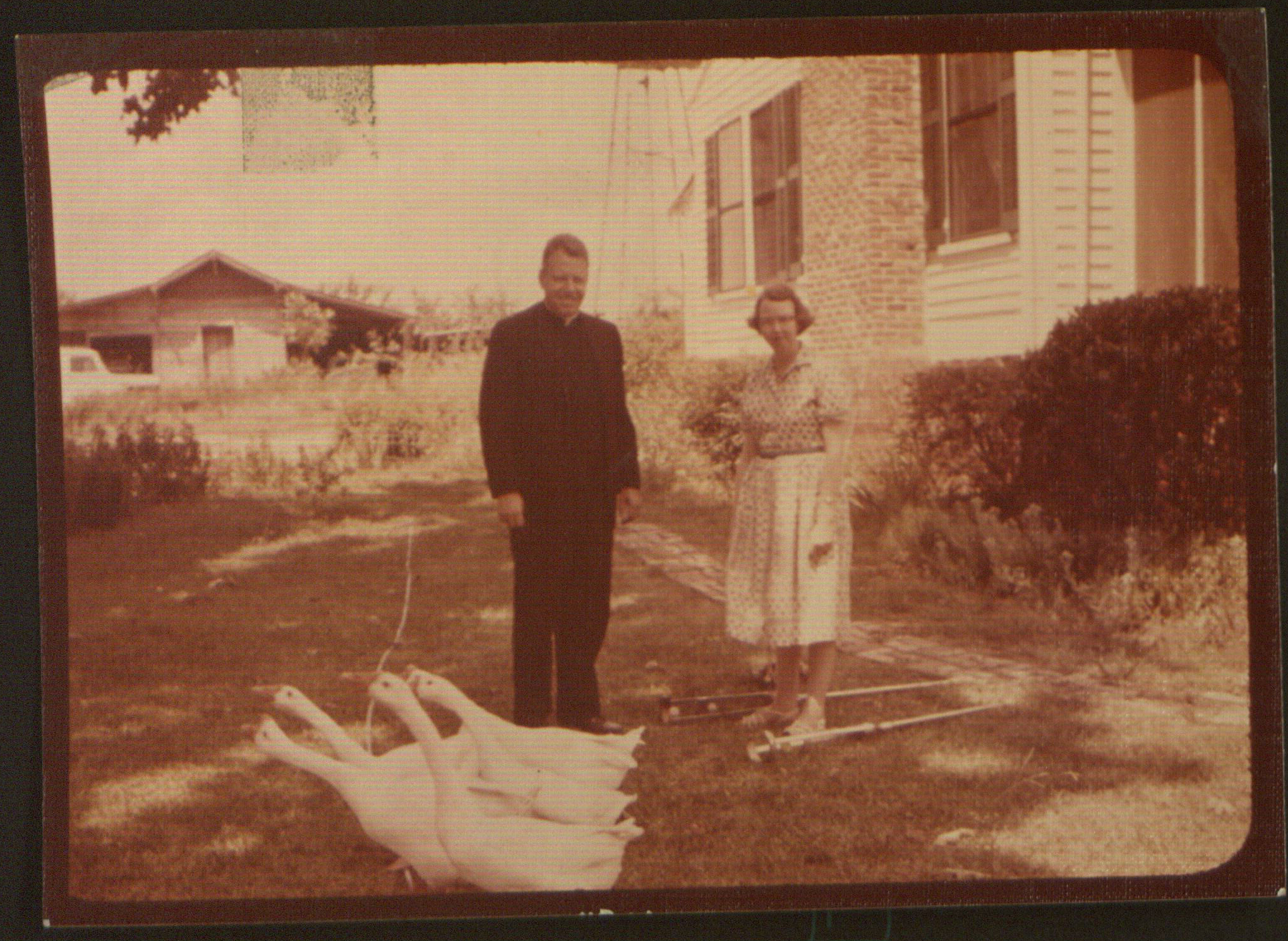 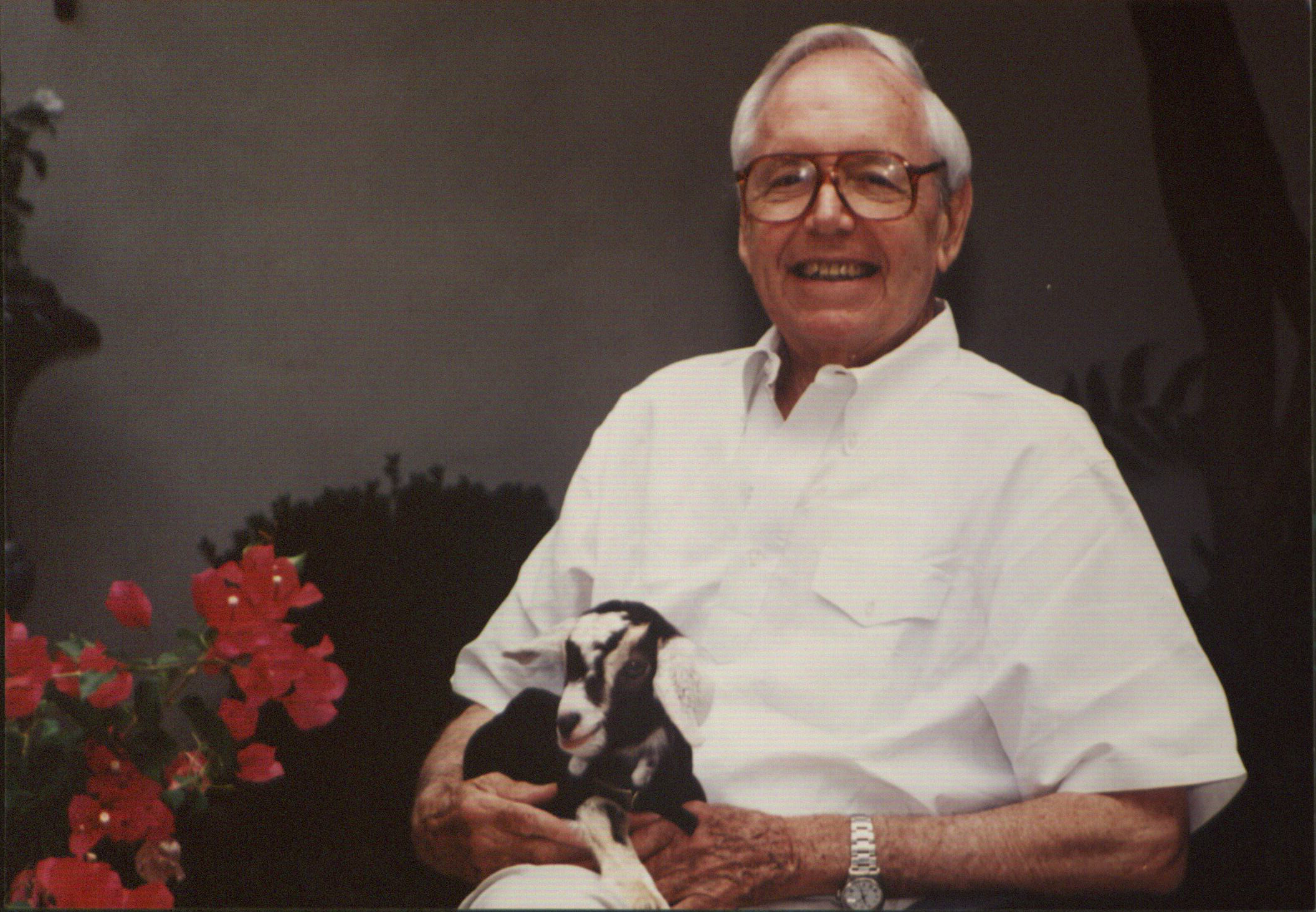 Photo of Fr. James Hart "Hootie" McCown, S.J., in his older years with a goat. 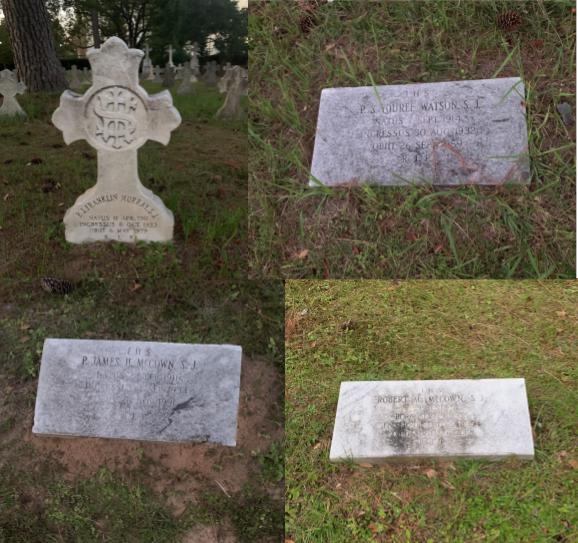 All four of the Jesuits that Flannery O'Connor was friends with are buried at the Jesuit Cemetary at Spring Hill College. These are the headstones of the graves. 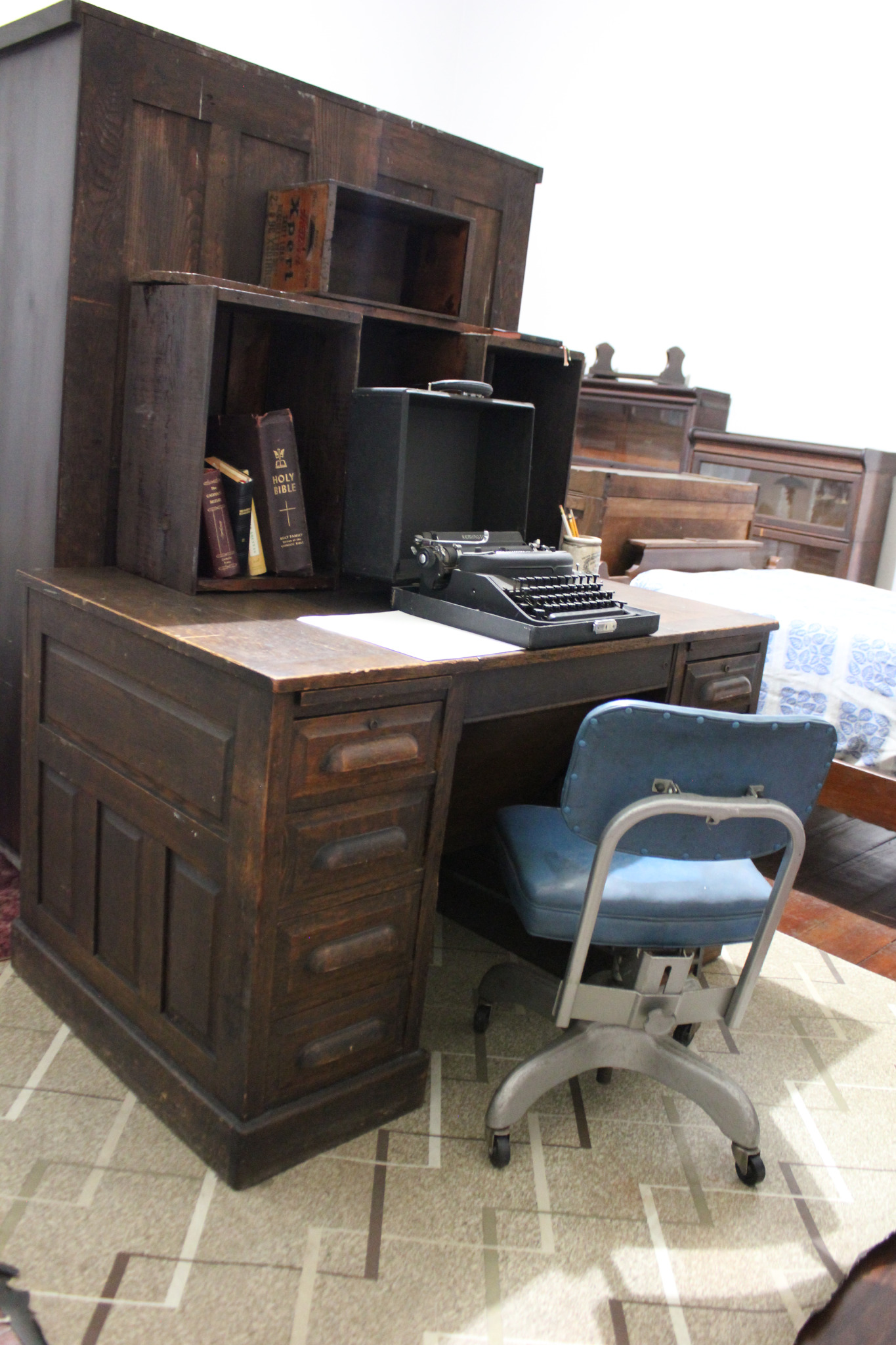 Flannery O'Connor spent the latter half of her life mainly confined to her home at Andalusia Farm due to an autoimmune disease called lupus. While she did travel a bit to lecture around the United States, most of her connections with her friends, like the Jesuits and faculty mentioned here, was sustained through letter writing. This photo is of O'Connor's desk, where most if not all of these letters were written. 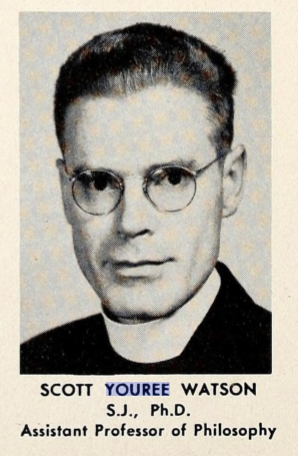 Father Scott "Youree" Watson, S.J., was born 7 September 1914. After graduating Spring Hill College in 1939, he was ordained a priest in 1944. He taught philosophy at Spring Hill College from 1948-1976, and then at Loyola New Orleans from 1976 until his death in 1989. He is buried at the Spring Hill College Jesuit Cemetery. Below, there are links to articles about his life.

O'Connor and the Jesuits Beyond Spring Hill College

In 1957, Flannery O'Connor wrote a piece called "The Church and the Fiction Writer" for America, a Jesuit magazine. The literary editor, Harold Gardiner, S.J., however, made some deletions and additions to O'Connor's essay... leaving her furious. Below is an article by America referencing O'Connor's anger, attempted reconciliation by the Jesuits, and Fr. James McCown, S.J.'s, take on the matter.

Mentions of Jesuits- The only fiction where Flannery O'Connor mentions a Jesuit is in her short story "The Enduring Chill." In the story, an ailing writer who returns home requests to meet with a Jesuit priest before he dies. There are two Jesuits in the story: one that he meets previously while in New York, and a less inviting one that comes to visit him on his deathbed. There is evidence that one of these Jesuits was inspired by O'Connor's close friend and Jesuit, James "Hootie" McCown, S.J. An article that addresses this connection is linked in the section above on James McCown, S.J., under the name "Alabama." This story can be found in The Complete Stories, which has been linked below.

Mentions of Mobile, Alabama- Flannery O'Connor mentions the city of Mobile, Alabama in her short story "The Life You Save May Be Your Own." This story tells the tale of a mysterious man who turns up at the doorstep of Lucynell Crater and convinces her to let him marry her deaf and mute daughter. At the end of the story, the man, Mr. Shiftlet, drives off to Mobile, Alabama. This story can be found in her short story collections A Good Man is Hard to Find and The Complete Stories, both of which are linked below. Mobile is also mentioned in her novel The Violent Bear it Away. This novel tells the story of Francis Tarwater, a fourteen year-old prophet who makes some risky decisions. The city of Mobile is mentioned very briefly at the end of chapter one. This chapter was published separately by O'Connor as "You Can't Be Any Poorer Than Dead." The first chapter is available in The Complete Stories, which, along with The Violent Bear it Away, is linked below.